El Peñón area on the Hermigua coastline has been an indispensable part of the economic, agricultural, social, demographic and industrial development of the municipality.

At the end of the 19th century, the agricultural production of La Gomera changed again, going from non-perishable products, easily storable such as cochineal, to other perishable ones such as bananas and tomatoes. These products need to be transported quickly to the receiving markets in Europe, so as not to lose quality or quantity. At this time, both Hermigua and the rest of the agricultural areas of the north of La Gomera are communicated with each other and with the outside by roads on steep terrain through which goods carried transported by people and pack animals and small piers in a rough sea. for which it was unfeasible to supply all agricultural production.

Thus, thanks to this need for fast communications and the technology of the Industrial Revolution, in the northern municipalities of La Gomera: Hermigua, Agulo and Vallehermoso, the construction of davits to enter and exit goods and people by sea is undertaken. These structures were built using stone and mortar for the prisms, an iron arm that, supported on one or more prisms, was placed on the sea where a ship could anchor to be stowed and a steam engine that was in charge of giving the necessary power. to raise and lower people, goods and animals. There was also a warehouse and offices to manage the transit of goods and a transporter that carried goods from the packaging workshops to the davit warehouse.The technology required for these infrastructures was well known to the British company Fyffes Limited, which was located in Hermigua. since the beginning of the 20th century to produce bananas and tomatoes in a valley with unbeatable conditions for agriculture. In 1907 the wealthy families of Hermigua and the emigrants returned from Cuba with a lot of money, who had also invested in agriculture, formed the Sociedad Anónima La Unión to save the problem of the output of production. With a share capital of 60,000 pesetas, distributed in 600 shares of 100 pesetas, the construction of the first davit was undertaken in 1907. After the pertinent works and the injection of another 50,000 over the initial budget, El Pescante de Hermigua is inaugurated. The start-up of El Pescante boosted the agricultural and industrial development of the municipality, at the same time that these fostered the demographic, urban and economic growth of the municipality, making Hermigua a very prosperous place. Thus, after the new impulse to the world economy that brought about the end of the First World War, the Society La Unión considered in the 1920s the construction of another davit close to the existing one in order to be able to operate at a greater distance from the coast, allowing the stowage would be a safer task and less dependent on the state of the sea. The work, five times larger than the previous one, would consist of the construction of six prisms and a 150 meter long arm. The work begins to be executed and four prisms are built, but in 1929 due to the closure of markets caused by the world crisis that arose from the Crac of 29, the work that would not be resumed due to the Civil War and the Second War is paralyzed. In addition to the closure of markets due to the global economic and war unrest and the delay caused by the Civil War, which led to a drop in agricultural production and therefore the activity of El Pescante, there is also the arrival of communications by road. In 1949 the construction of the road that connects San Sebastián de La Gomera and its port, operational from 1955, with the north of the island was completed. Thus, El Pescante de Hermigua was dismantled in 1960. 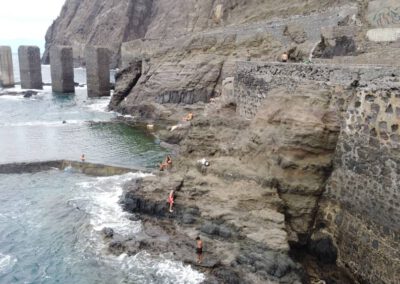 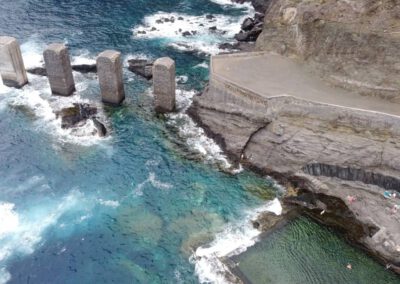 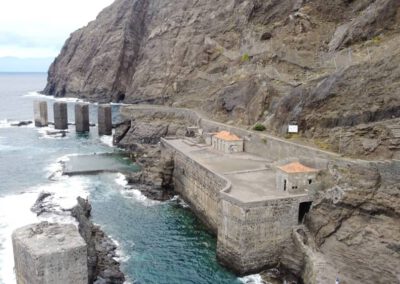