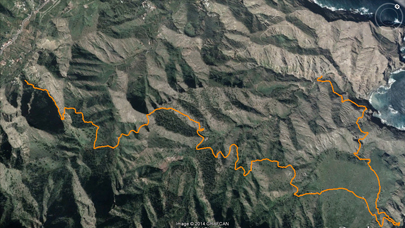 The sugar industry was so important to the town of Hermigua that the heraldry of the municipality presents a sugar mill. This trail runs along the same route by which the sugar was carried from the valley of Hermigua for export to European markets during the sixteenth century.

The trail starts at the paved track of the road in the district of Las Poyatas, road CV-21. It begins with the climbing along a path on an old concrete wall with a wooden railing overlooking a road bordering farmland where millet and potatoes or, in the above areas, vines are grown. As you go up that way you’re getting to the bottom of the ravine and reach an area covered by palm trees where the road is almost flat.

Then we get to an area where the ground becomes rougher and the slope increases until we reach the intersection of the path with the bottom of the Cañada de la Chíchara. Depending on the time of year we are in we can find puddles or water flowing through this place. Next, we must overcome a slightly steeper pitch, nestled in the side of the basalt ravine, with the security that give us some wooden railings.

Overpassed the previous step, La Cañada La Chichara opens. It becomes wider and less large vegetation: solitary palms or small palm groupings are acompanied by scattered bog myrtles, mostly located near the bed of the ravine, where their roots have better access to groundwater. The bushes, cactus and grass constitute the most abundant vegetation in this area. The slope in this stretch is going from less to more, but without being excessive. So, you get to the end of the ravine, where you have to make a left turn to start to climb up the side of the ravine. We do this on a cliff and yellow ground, secured with wooden rails from which you can see in front of you the valley of Hermigua – a view that increases as we crown the mountain.

So, we reach a plateau known as Los Descansaderos, and as its name indicates, is the ideal place to take the backpack off and rest after the climb we have done. In addition, the views are unbeatable, you can see all the Lower Valley of Hermigua and a part of the Upper Valley. On this spot once there was the feast de la Cruz, the day was celebrated at May 3rd, in addition to the placing of a cross on an adjacent ridge, visible from much of the town, a party with music from a record player was made.

We continue the march to move towards Los Alamos. This section of the trail runs along the mountainside formed by several creeks, it is mild with minor ups and downs but the ram is virtually flat. Regarding to vegetation there still dominates the grassland, splashing some species like the tedera, cerrajón, fennel, agaves and cactus. Palm trees are also present, in small groups or solitary. It is not uncommon to find wild rabbits in this area that enjoy the benefits of the sunny hillside. The scenery stars the Lower Valley and the Bay of Hermigua.

Once we arrive in Los Alamos we realize the reason for its name. Hundreds of these trees cover the top of the canyon of “Los Barranquillos”, once a prosperous agricultural and livestock village that was inhabited until the end of the twentieth century. A large water tank – known as the Linares tank – and large terraces can be seen in the undergrowth. Following the march, the trail leads to the bottom of the ravine between poplars and palms and then cross it. Here it is always fresh and, depending on the time of year, we find running water. Once on the other side of the ravine and walking a hundred metres we come across a crossroads with a vertical pole that guides us. A branch of the trail continues along the bed of the ravine of Los Barranquillos to reach the neighborhood of Las Nuevitas, in the other direction we continue our journey to the area of Montoro and La Caleta, our destination. So we start walking up the path with a slope which increases, with wooden rails in the most dangerous parts of the climb. As you go up the views are increasing and once we reach the top we just see two different landscapes, on the one hand a more green with plenty of water on the side of “Los Alamos” and one other drier with pine trees on the side of Montoro.

Going down, we are passing through the area of Montoro, today also in decline but retaining agricultural areas where grapes are grown. As we mentioned the decline takes place in the pine forest zone and with Tenerife and Mount Teide in the background. The trail ends at a private track we walk down for about 20 meters until we reach a dirt track we take on the left, as if we go back to Hermigua, and continue over 1400 meters, until we find on the right a post for a crossroads where we choose the direction to El Moralito, in the bottom of the ravine to which the arrow points on a dirt track.

Once arrived at the group of homes at El Moralito we follow the trail continues down the ravine between some palm trees and reeds. Thus we arrive at a farmland through which passes the path and where a small hill starts that leads us down to the left side of the ravine that leads to the beach of La Caleta.

The view along this stretch is great and you can see the renewable energy facilities that the City of Hermigua has put for the facilities that are on the beach and its surroundings. This route ends just above the beach of La Caleta on a wide curve like a viewpoint with the sea and Tenerife on front, the beach of La Caleta on the left, the east coast to the left and looking down we see El Caletón del Azúcar, an old pier where the sugar from the valley of Hermigua was sent to Europe in the sixteenth century.

You can also follow the path to get to Las Salinas, Pier of Lorenzo and El Palmar, to continue discovering the east coast of Hermigua. Or go back and go down to the beach of La Caleta to enjoy a bath, food, drink and rest a while.