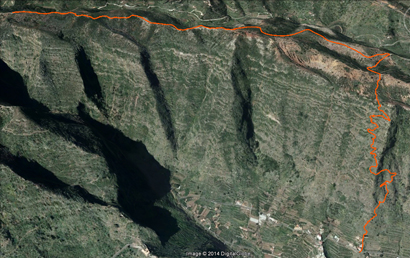 To access the starting point, we must place ourselves in the GM-1 highway towards Vallehermoso. At the height of 29.9 km we leave the main road to take the intersection of “Las Rosas” to the left, beginning a climb of about three kilometres to take us to the Visitor Center; At this point, the road splits in two; take the turn to the left towards “Los Aceviños – Meriga – El Cedro”. We begin a descent that will take us to the hamlet of “La Palmita” and at another detour after 2.7 km, we will take to the left towards “Los Aceviños”. After the descent, we arrive at the bottom of the canyon of “La Palmita” which we the cross, leaving at the right margin some villages where wood is still used as raw material for combustion. We will initiate a climb for 1.5 miles. Aproximately until about to reach a hairpin bend to the right, where we see a first access to a red dirt path on the left side, which will coincide with the start of this route. We must not confuse the next access, at 50 meters, which brings us to another path, which leads into the bed of the “Barranco de Liria”.

The trail, which runs along the top, becomes the natural border of the municipalities of Hermigua and Agulo, and ranks, both in height as for his guidance in the area of high frequency of sea clouds and higher annual rainfall. This makes the potential dominance of vegetation with the presence of heathers, mainly beech and Monteverde and other introduced tree species, such as chestnut, canary pine and Aleppo pine (predominantly American species throughout Europe) that can be found especially in the beginning of the route. However, land reclamation, charcoal production and livestock and forestry, in earlier times, have also left their mark. The reddish color of the earth is strikening; it is a nutrient-rich soil as in minerals, essential for the development of the vegetation that abounds in the area.

During the smooth crossing of the first few kilometres there stands out on the left the “Barranco de La Palmita” crowned on one of its margins by the Visitor Center. On the right side, sometimes we can make out some details of Hermigua. And if we look to the horizon, ocationally we can see the silhouette of the island of Tenerife, over a sea of clouds with the wonderful picture of the Teide.

After starting the trail and after 2.5 kilometres, the road shows a detour. We follow the main road on the right, 200 meters after a slight descent it leads to a natural staircase that was recovered and properly marked. It indicates that we should leave the initial path and crown the “Cumbre de Lomo Gordo”, an area eroded by deforestation and that is at the mercy of external agents and so continues its changing process.

From this privileged watchtower point, of great scenic interest, Hermigua is presented in all its glory. Firstly we can admire the fertile ravine of “Liria”, which runs along the right. In the background, stand out “Los Roques de San Pedro”, who, undaunted, seem to see the valley as if they were two guards. And if we keep moving our eyes, we can get to the end of the valley to the rough northern waters of Playa Santa Catalina. After a short break, we will begin the descent down to the area known as “Risco Camacho”, for more rugged terrain and a fairly steep slope, between 10% and 20%. However, the recovery of this path has led to enlarge safety margins for normal traffic. Once, men and women, beasts of burden and cattle, passing through these winding roads, most of the time, full of all kinds of products that were sold and traded with people from other valleys.

In this descent, winding and steep, we see frequently the stone buildings associated with natural caves, reused, sometimes for pastors as shelters in inclement weather, which are, today, witnesses a rich and varied archaeological heritage.

The road, which winds through the hillside, shows unusual tree species in the area. The presence of pine reveals that the speculative wood industry used this place as a giant greenhouse for growing pine and subsequent logging. Likewise, the existence of agricultural terraces, which colonize the slopes is significant sample of the wealth of the land.

A small palm adorns the end of the trail, which, among a pool of water and the houses of “El Cerrillal”, lead to stairs that guide to a paved road. From that point, we must turn to the left until we find a small road that directs us to some stairs near Ibo Alfaro.